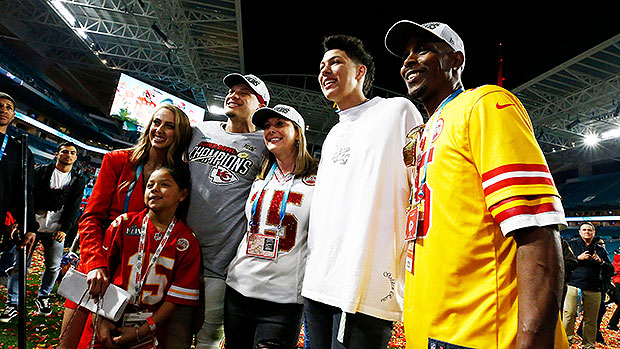 Patrick Mahomes is a big brother to Jackson, Mia, and Zoe. Here’s what to know about the Kansas City Chiefs football quarterback’s siblings.

Kansas City Chiefs football quarterback Patrick Mahomes sticks by his family. In September, a video that featured his brother Jackson pouring water on a heckling fan following the Chiefs’ loss against the Baltimore Ravens quickly went viral. When asked about it at a press conference a few days later, the athlete, 26, had his 21-year-old brother’s back, explaining that the clip didn’t include the things said to his brother and his fiancée Brittany Matthews.

“Obviously it’s something that we don’t want to necessarily do,” Patrick told reporters. “There was things said to him, and Brittany, that you don’t see kind of on the clip. But, I mean he’s been good at it, at not trying to respond to that stuff. He takes a lot and he’s usually pretty good at it. And he’ll learn from it and just try to stay away from those people as best he can.” A supportive big brother!

Patrick is also half-brother to younger sisters Mia Randall, 10, and Zoe Mahomes, presumed to be about 6. After the athlete’s parents Patrick Mahomes Sr. and Randi Martin separated in 2006, they both welcomed daughters of their own with other partners. So, who are the quarterback’s siblings? Below, everything to know about Jackson, Mia, and Zoe.

Jackson is Patrick’s one and only brother. Born on May 15, 2000 to Patrick Mahomes Sr. and Randi Martin, the 21-year-old is, like most Gen Z, an internet personality known for his TikTok videos. No surprise here, but much of the backdrops of his videos take place at his brother’s football games, with recurrent content being dance videos. With over 988,000 followers, it appears to be what the people want. He’s also a college student, taking a different path from that of his athlete brother’s: Jackson studies marketing at the University of Missouri–Kansas City, according to a recent introductory YouTube video he shared. While much younger and not an athlete like his brother, it’s amusing to note that Jackson towers over Patrick.

Born July 12, 2011, Mia is one of Patrick’s half-sisters. Mom Randi welcomed her several years after her split from husband Pat Sr. The proud mom regularly shares snapshots of little Mia on her Instagram, including one from her first day of fifth grade in August. Don’t be surprised if the 10-year-old decides to follow in her athlete brother’s footsteps. It appears that Mia is also a fan of football. Her mom recently shared a video of her throwing the old pigskin at a stadium. Plus, Mia has been awarded an Awesome Athlete certificate, proving that the apple does not fall too far from the sibling tree. Along with football, Mia also plays soccer and tennis.

Finally, Zoe is one of Patrick’s two step-sisters. His dad welcomed Zoe with a former partner sometime in 2015. Like her family, Zoe has an affinity for sports. The 6-year-old is a soccer player. As evidenced by her Instagram, she’s also a miniature basketball enthusiast. It comes as no surprise that a love of sports is a recurrent theme throughout the Mahomes family, as Zoe and Patrick’s father was formerly a professional baseball player who played in Major League Baseball between 1992 and 2003. Throughout his career, Pat Sr. played for the Minnesota Twins, Boston Red Sox, New York Mets, Texas Rangers, Chicago Cubs, and Pittsburgh Pirates.